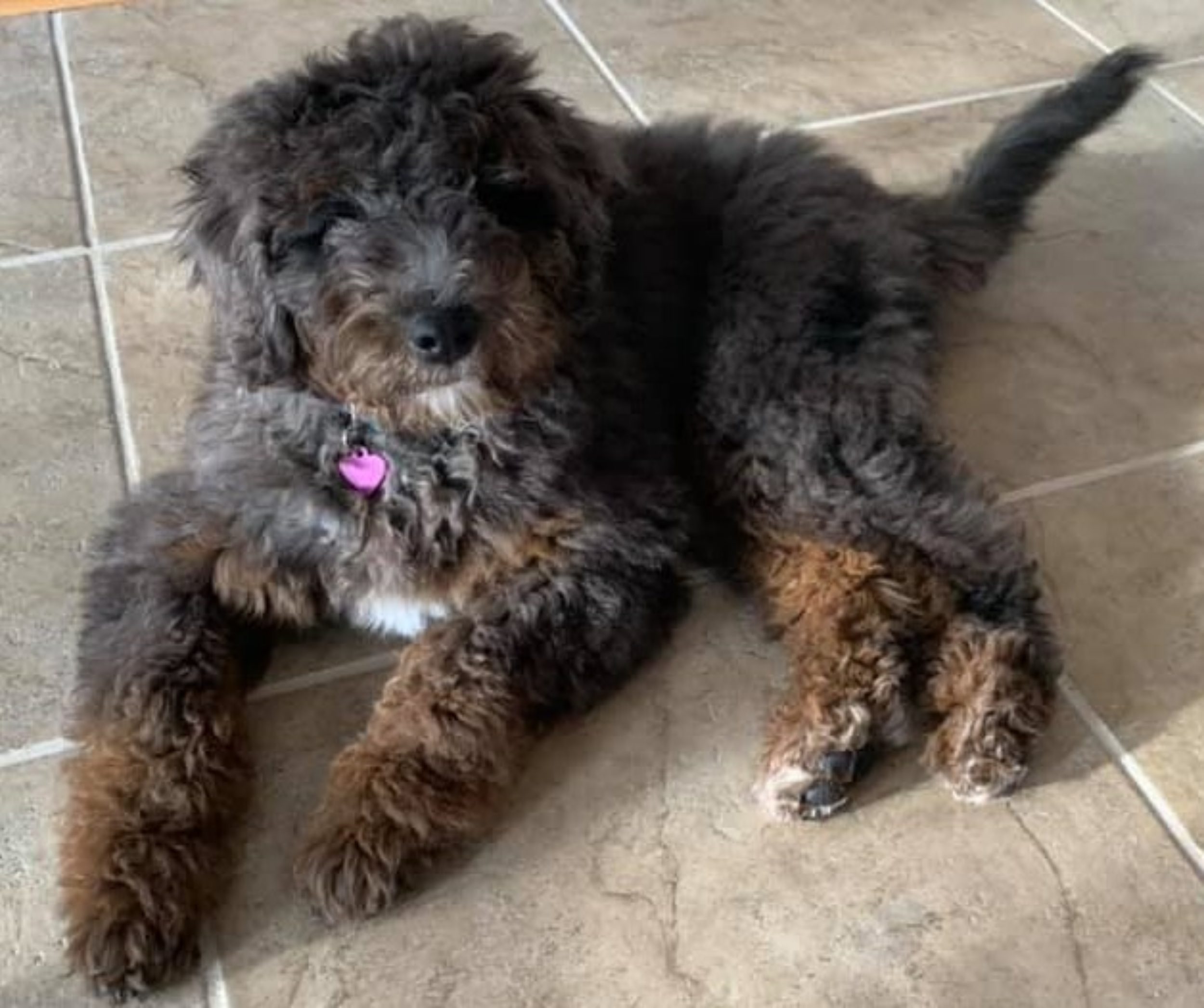 Mocha getting to know his children!

All of our puppies are sold with a strict spay/neuter agreement which is part of our sales contract.

Your Smoky Mountain Doodle puppy will have been examined by our veterinarian at approximately six weeks old; will have received age appropriate vaccinations and deworming; and will be microchipped.

Below is a description of our Early Neurological Stimulation program that we perform with each puppy from days 3 - 16.    This is an excerpt from an article taken from a dog breeding seminar given by noted breeder, author, lecturer and researcher, Dr. Carmen Battaglia.

"In an effort to improve the performance of dogs used for military purposes, a program called "Bio Sensor" was developed. Later, it became known to the public as the "Super Dog" Program. Based on years of research, the military learned that early neurological stimulation exercises could have important and lasting effects. Their studies confirmed that there are specific time periods early in life when neurological stimulation has optimum results. The first period involves a window of time that begins at the third day of life and lasts until the sixteenth day. It is believed that this interval of time is a period of rapid neurological growth and development, and therefore is of great importance to the individual."

"The "Bio Sensor" program was also concerned with early neurological stimulation in order to give the dog a superior advantage. Its development utilized six exercises which were designed to stimulate the neurological system. Each workout involved handling puppies once each day. The workouts required handling them one at a time while performing a series of five exercises. Listed in order of preference, the handler starts with one pup and stimulates it using each of the five exercises. The handler completes the series from beginning to end before starting with the next puppy."

"The handling of each pup once per day involves five exercises which produce neurological stimulations, none of which naturally occur during this early period of life"

"These exercises impact the neurological system by kicking it into action earlier than would be normally expected, the result being an increased capacity that later will help to make the difference in its performance. We continue to play with the pups and routinely handle them because the neurological exercises are not substitutions for routine handling, play socialization, or bonding."

"Five benefits have been observed in canines that were exposed to the Bio-Sensor stimulation exercises:

Research has shown that puppies begin hearing at around 21 days. During the first week of hearing there is very little startle response to loud noises. We take advantage of this time to begin conditioning our puppies to accept these noises while they are eating, doing something pleasant while they hear, startle and recover.

Puppies will get used to hearing the noises that they will encounter in their future life.

Sound conditioning will continue at each meal until puppies go home to their new families.